Master Coach Clarence Chan has been actively running since 2008 starting from half marathons to full marathons and into Ironman events as well as in ultra races. As a 6-time Ironman finisher and All World Athlete (Silver) Awardee for the last 3 years, Coach Clarence embarked on longer races from 100km to 320km after picking up ChiRunning in 2015. With the knowledge he acquired, he was able to overcome knee pain which he suffered while in NUS as a competitive cross-country runner for the University and School of Business Administration. In 2017, Clarence completed the 7-day Gobi March, one of the four desert races by Racing The Planet.

In 2018, Coach Clarence completed the US Grand to Grand Ultra Trail – a 7-day self supported race – over 273km. He also attained a Boston qualifying time for his age group at 3.48H in June 2018. Starting the year in Jan 2018, Coach Clarence completed his first 200miles (320km) in Singapore. Today, Coach Clarence practices the ChiRunning technique with his students in Singapore as well as students from the regional countries such as Malaysia, Thailand and Indonesia. Coach Clarence also just attended the Instructors’ Workshop in Charlotte, North Carolina, USA in Nov 2018 and is even more excited to share the latest update with his students and see the improvements from them – both in Energy Efficiency and Injury Prevention aspects.

In March and April 2016, Coach Clarence traveled to meet Mr. Danny Dreyer, founder of ChiRunning. Together, they trained with Master Coaches from the United States. Coach Clarence also assisted Danny and the Hong Kong ChiRunning team with instructors’ workshops, trail running workshops as well as the on-going ChiRunning summit.

Coach Clarence started his first half marathon in 2008. Before that, he had the notion that his knee injury would not allow him to run more than 10km and he never ran beyond 2.4km since he left University. He only ran to fulfill his NS obligation to complete his IPPT requirements.

Entering his 1st full marathon in mid-2008 was also his first hard lesson on how to overcome knee pain issues. He read and shared notes with athletes as well as gym instructors on how to avoid or minimize the pain in his knees. Working through stationary exercises as well as gym machines helped though the pain was always nagging now and then. He ran between 2 to 5 marathons a year and several half marathons each year. He also started his 70.3 and then full Ironman events since 2011. After picking up ChiRunning in early 2015, he started to see there could be hope in running a pain-free marathon. It was also that time that he started running 100km ultra events even more…..the Singapore Craze Ultra 105km, Penang Twilight Ultra 100km and the TNF 50km events. With more practice, he learnt how to make his runs even more efficient and injury free. In Jan 2016, he ran the 200km ultra event and completed it in 33+ hours. Shortly after, he took part in Titi100 – the toughest road race – and completed in top 15th position. All without injury and above all faster than he would use to run. He adds: “ I am really pleased with how ChiRunning technique has helped me to become a more efficient runner and above all, kept me free from injury. “

Today, Coach Clarence practices the ChiRunning technique with his students and continue to strengthen his core to run better and more efficiently. 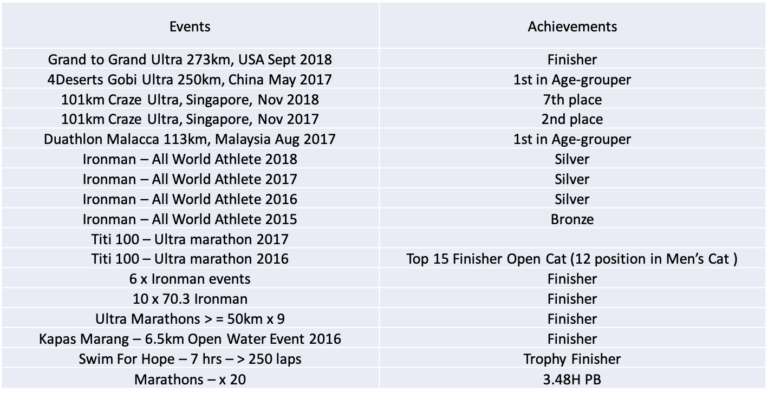